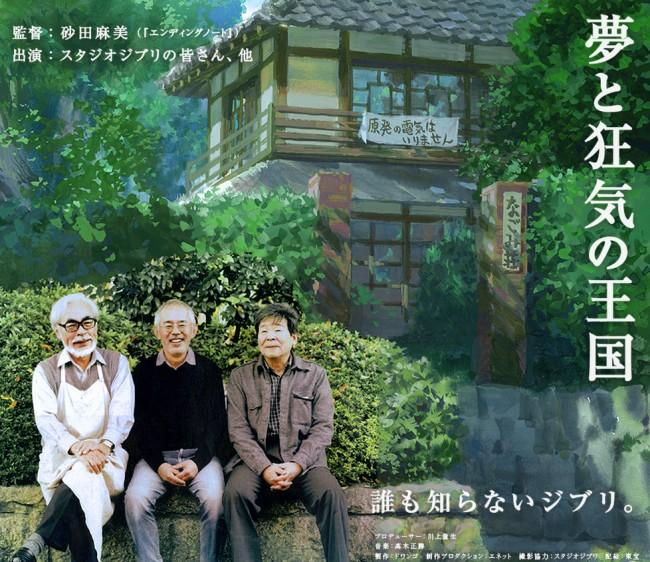 This piece was originally written as a guest review for easternKicks. It comes as part of easternKicks’s coverage of the San Diego Asian Film Festival, with SDAFF providing access to an online screener (thank you!). In the UK, the documentary will be available on DVD from StudioCanal on December 1, 2014. In the US, it will be released by GKIDS in select cinemas on November 28, 2014 and available for digital download on December 9, 2014.

Given that it has been nearly thirty years since Studio Ghibli, Japan’s probably most famous and, internationally speaking, most successful animation studio, was founded in June 1985, it comes as somewhat of a surprise that there has to date been no feature-length documentary on it. Nippon TV did produce a 28 minute feature –「ジブリはこうして生まれた」(Jiburi wa kōshite umareta/This Is How Ghibli Was Born) back in 1998, but this was prior to the Best Animated Film Oscar for「千と千尋の神隠し」(Sen to Chihiro no Kamikakushi/Spirited Away, 2001) that catapulted its director, Miyazaki Hayao, and the studio into the global limelight.

For those who know little about Studio Ghibli, Jiburi wa kōshite umareta may well be a better starting point as it provides the factual details – about the founding of the studio, the origins of its name and a chronology of all the films produced – while Sunada Mami’s documentary is for the fans: those for whom Miyazaki, Takahata Isao, Suzuki Toshio are already household names, those who have grown up with the cuddly forest spirit Totoro (from 「となりのトトロ」/Tonari no Totoro/My Neighbour Totoro, 1988) , cried buckets of tears over 「火垂るの墓」（Hotaru no Haka/Grave of the Fireflies, 1988）and queued around the block on the opening day of the latest Ghibli release.

Filmed over the course of a year, Yume to Kyoki no Okoku offers a glimpse into the Japanese studio as two animations – both possible swan songs of Miyazaki and co-founder Takahata – are being made:「風立ちぬ」(Kaze Tachinu/The Wind Rises) and「かぐや姫の物語」(Kaguya Hime no Monogatari/Princess Kaguya). What we learn is largely random. The staff – Miyazaki included – does radio exercises in the studio (he struggles to remember exercise routine number 2). The Ghibli cat, white with black patches and a thick, stubby tail, wanders nonchalantly from one room to another, much like a real-life Muta (「耳をすませば」/Mimi o Sumaseba/Whisper of the Heart, 1995), although he knows only too well to avoid Miyazaki’s corner when the director is working on a film. Cigarettes are constantly being lit up (there’s as much as smoking as probably in all Western films together over the last five years). A plush Totoro peeks over the edge of a table while a meeting is being held. Another hangs out in the lobby. Toy goats from the 「アルプスの少女ハイジ」( Arupusu no Shōjo Haiji/Heidi of the Alps, 1974) TV production enthrall school children by the window.  Doodles, some motivational, some just kawaii, are posted in every nook and cranny of the workplace and one ceiling comes with a tripartite painting.

Interspersed with all these bits of inspirations are snippets of interviews. Here, the most visible face of the Studio – Miyazaki of course – takes the centre stage and he loves it. He grumbles into the microphone as if too busy, as if barely tolerating Sunada’s gentle presence, but really takes her everywhere – to his work desk, to the rooftop, even to his home – and shows her plenty. Sunada’s camera also introduces us to Suzuki Toshio, a founding member and the main producer behind Studio Ghibli, who operates more on the sidelines but is ever-present. We also meet, more briefly, various other staff members, including Miyazaki’s son Goro (still weighed down by the burden of his iconic father), Nishimura Yoshiaki (the producer now behind Takahata) and「新世紀エヴァンゲリオン」(Shin Seiki Evangerion/Neon Genesis Evangelion, 1995-1996) director Anno Hideaki (recording lead character lines for Kaze Tachinu in some particularly delightful scenes).

The one who is conspicuously absent throughout, however, is Takahata. Although we learn a few tidbits about him through the conversations of others (he works in a separate building in another location, his nickname is Puka-san, he’s absolutely terrible with deadlines, so much that his producer has married and had two children in the meantime), he appears on screen for no more than a few minutes. Takahata is very much a human curio. Abroad, his name is much less known, and more dispersed (Kaguya Hime is his first feature-length animation since 「ホーホケキョ となりの山田くん」Hōhokekyo Tonari no Yamada-kun/My Neighbours the Yamadas in 1999) and, unlike Miyazaki, his face doesn’t pop up in fanart. The quality of Takahata’s work is as high as that of any Ghibli production, but his creations are somewhat more on the periphery of the studio’s output: they are at times devastatingly more serious (「火垂るの墓」, Hotaru no Haka/Grave of the Fireflies, 1988), feature more uniquely adult perspectives (「おもひでぽろぽろ」/Omohide Poro Poro/Only Yesterday, 1991), and aesthetically seem more like delicate watercolour paintings (Hōhokekyo Tonari no Yamada-kun; Kaguya Hime) than popular animations. And yet, we realise, Studio Ghibli would not be the same without Takahata – he, after all, discovered both Miyazaki and long-time Ghibli score writer Hisaishi Joe.

Giving us a fascinating look behind the scenes, in some strange way Sunada’s documentary essentially confirms what we already knew. Miyazaki is just like we have imagined him to be; Suzuki is there all the time, almost unnoticeably so, while Takahata remains the great mystery he has always been. Although for many Studio Ghibli’s name may be synonymous with Miyazaki Hayao only, it is clear that it is the peculiar symbiosis – one away in the bright spotlight, one in the half-light of the sidelines, one hidden in the shadows – between all three that has given million of fans around the world animated films that will charm them again and again.

Yume to Kyoki no Okoku is a documentary for the fans – those that grew up with Totoro, cried buckets of tears over Grave of the Fireflies and queued around the block for the latest release of Studio Ghibli –, offering not so much factual details as a delightful glimpse behind the scenes of Japan’s most famous and successful animation studio over the course of one year.

Select quotes from the documentary: